There are an unknown kind of beings, which are investigated and documented by the artist Carola Rümper since several years. Already in her childhood, the artist found the population in the northern lowlands of Germany (a region colled: Land Wursten), where she grew up.

They are specially shaped creatures, usually characterized by a corpus with different tentacles. Particularly striking is the black skin. The size of the Rümperiens is variable, it has been observed so far in size between 5 and 20 cm (ca 2 to 8 inches), there is no front and back, no up and down. The locomotion takes place in fast, agile movements to all directions.

Known geographical distribution are Germany, Russia, Egypt, Alaska and the Switzerland. Total counted were so far 162.341 characters. It is thought that the Rümperiens are native also to other countries of the world. The search will be continued permanently.

Also was found a strong affinity to clouds. It was observed that the creatures unprotected gather along the streets under specific cloud-formation. The research also continues in that direction.

The Rümperiens live terrestrial, they are both diurnal and nocturnal. It is unknown how if they need rest periods and how many, neither the duration. It is also unknown where they withdraw at that time.

The way a Rümperien is reacting in disorder and danger is still to be determined. So far, there were no reports of attacks on other living beings.  If the Rümperiens have natural enemies and have a defense system to fight opponents, nobody cood report of until now.

The Rümperiens are very shy, however, their natural curiosity let them always penetrate into the living space of the people. Verifiable they like to be up to the vicinity of humans 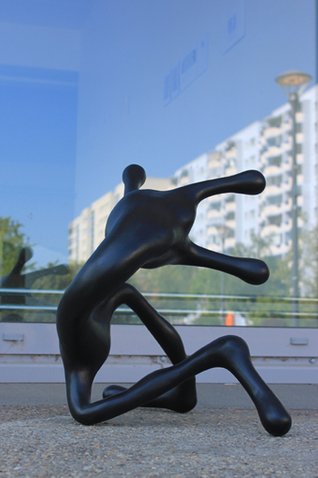